Black Sheep VC Orcadia is part of the canon of works produced by Julian Cope’s Black Sheep collective. Highly experimental and somewhat controversial, it was released in August 2010 on Julian Cope’s Fuck Off & Di label, the album consisting of a series of archaeosonic experiments recorded by Common Era and Vybik Jon inside the Neolithic chambered cairns of Orkney. It consists of four megalithic vocal experiments and includes a highly informative 16-page booklet, much of it written by Julian Cope, under whose wing this project was developed and encouraged.

What others are saying about the album…

“Two pseudonymous hairy-biker types. Vybik Jon and Common Era, travelled to the Orkneys in the summer of 2010 to sit unselfconsciously in Neolithic chambered tombs and improvise appropriate responses, using only their mouths and things found on the floor. Seasoned vocal extemporists such as Phil Minto or Yamantaka Eye might pull this off. Black Sheep VC don’t. Yet Orcadia is heroically ludicrous, its spirited barking, bleating and bellowing occasionally approaching almost transcendent note-splitting. And a beautifully designed and academically thorough booklet consolidates this future classic”

“…Who, upon hearing these Growlers, cannot fail to effect within themselves a genuine seismic shift in their consciousness? Will any man or woman — after even a short time listening to ORCADIA — ever again enter the megalithic portals of their local prehistoric chamber without inadvertently emitting similar noises?” 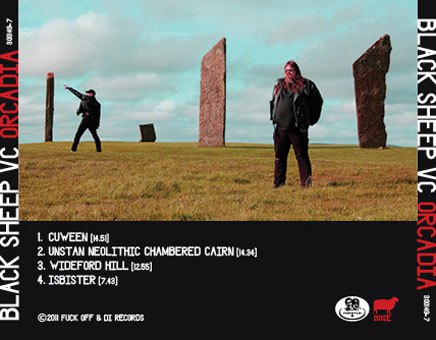